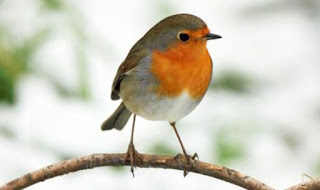 In order to control my unruly class, I waved about the annual Christmas carrot-stick.
‘Santa Claus might be watching,’ I said. ‘This is the time of year when he sends his elves and robin redbreasts out to check who is being naughty and who is being nice.’

The class settled down in time for their basketball coach to take them outside to practice. All the children filed out, with the exception of three unwell students who were staying inside with me. The class had no sooner left when a robin hopped in the open door. Myself and my three students watched in disbelief as the bird, feathers fluffed up against the cold, hopped calmly around the classroom. Up and down the rows of desks the little bird skipped, as if inspecting the room. Over spilled pencils it skipped, between strewn schoolbags and fallen books.

Mouths open, my three students watched the bird perform its inspection, visiting each desk in the room, before returning to the open door. It looked back once at the three girls, before disappearing outside.


When my class returned from their basketball practice I had a story to tell, and three witnesses to back me up. Needless to say, the children were very well behaved for the rest of the afternoon. Happy Christmas!
Posted by Kieran at 12:02 No comments:

A Bird Lies Down to Die on its Own Funeral Pyre.

A bird fell down my chimney while I was away for the weekend. How unfair that this creature of the sky should have to spend its last hours, and perhaps days, in a frantic fluttering attempt to vertical take-off up a soot-caked flue, until finally, weary and broken it lay down its head to die upon a heat-warped fire-plate. And just as it was about to give up its bird-shaped ghost, it spotted the narrow gap into the stove. With renewed vigor and hope, it pushed its already spent body through a gap designed for smoke but not for birds, until it emerged joy-filled into an open space stacked with newspaper, kindling and a single firelighter. Through glass blackened round the edges, it peered into my sitting room at my wooden floor and armchair piled high with books and cushions, at my TV, and at my window, through which the grey November sky called the bird home. But there was no way past the metal stove walls, no way past the blackened glass, no way through the grate beneath. It tapped on the glass with its tiny beak, but there were no ears to hear the knocking, no hands to open the door. After one final look at the sky outside, it lay down to die on its own funeral pyre. Returning on Sunday night, I opened the stove door to strike a match, and faltered at the sight of this tiny bird perfectly placed on top of my unlit fire. A single lifeless eye, black and glassy, stared out at me, and on the feathers beneath it, the silvery trail of a liquid which leaked from it. I don't know if birds can cry. Google says they can't. But I believe that was a teardrop, and this is mine for the bird.
Posted by Kieran at 11:34 No comments: 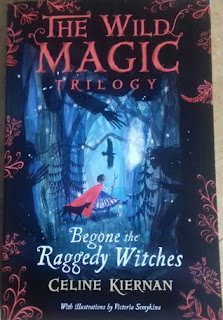 An impressive debut for this age range - made all the more appealing by a stunning cover. I also love the title, and the names of the characters. The book is a cross between Narnia, Abi Elphinstone's The Dreamsnatcher with a sprinkling of Tolkien and Grimm.
Posted by Kieran at 13:09 No comments: