Review of THE MYSTERY OF THE CLOCKWORK SPARROW 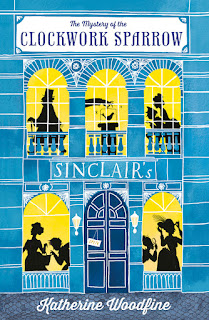 This thrilling novel, set in early 1900s London primarily centres around orphan, Sophie, who has just got a job in the magnificent department store, Sinclairs. But when the priceless Clockwork Sparrow is stolen, Sophie is led on a wild adventure in which she meets many foes but also friends like Lil, Billy and Joe. The narrative shifts seamlessly between these four characters as they try to solve the mystery and outwit the notorious Baron.

As a lover of fashion, my daughter was very much drawn to this book because it's full of decadence and style. The descriptions of the luxurious department store are particularly evocative of a different era and the reader is immediately drawn into this world.

Well written and researched, the tale keeps its readers on their toes with constant twists, double-crossings, surprises and danger by the bucketful. The ending in particular is extremely pacey and action-packed.

I particular loved the bit where Sophie escapes a locked room using the newspaper under the door trick because this was a trick (in games only!) we used to do as kids. I also liked the fleeting villain, the Baron, and how his identity is not revealed. I'm guessing he reappears in later books. I for one, have a sneaking suspicion that he is... Better not say!

Great story, full of wonderful characters. Kids (especially girls) will love it!
Posted by Kieran at 11:53